The Kalu Ulu Memorial Foundation is a tax-exempt non-profit organization geared towards improvement of the health and socioeconomic status of indigent rural-dwellers in Nigeria through provision of free goods and medical services. It was founded by Dr Anuma Kalu Ulu who was nominated for the “2009 and 2010 CNN-Heroes Award” for his philanthropic work. 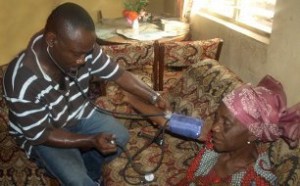 Dr. Ulu started this free medical mission formally in 2004 by opening an already standing debilitated community health center that was devoid of staff, medications or equipment. He subsequently provided what was lacking. Many patients availed themselves of this free medical service, especially women, and it was an astounding success. There were patients who had never been seen in their life by a medical doctor, with majority being over 60 [sixty] years old. Most of them had elevated blood pressure of about 220/130 and were never aware of their hypertensive states. As a consequence, some succumbed to end-organ damage like massive heart attack, stroke, visual and kidney damage without diagnosis. These deaths were easily ascribed to curses and superstitious beliefs. On the whole, up to 100,000 patients both new and recurrent have been treated in the program.

In 2004, more than 90% of the patients were hypertensive. The same ominous statistic was applicable to other diseases like diabetes mellitus, asthma, arthritis, eye problems, infectious, neurological and cardiac diseases as well as malaria. These diseases combined, killed people steadily. With the team I assembled, significant progress was made but I was not able to cater to everybody within this short period of time. Due to lack of funds, I could not employ any doctors or trained nurses for continuity of care. My cousin who owned a local medication store provided continued though inadequate care in my absence. I left medications and automatic medical equipment with him, trained him on their use, and patients came to him for monthly rechecks and medication refills. He would then discuss the results with me and refill their medications free as per my instructions. Apart from what I left with him, I also sent replenishment year-round as needed, including cash, medications and essential goods to the patients.

In 2006, due to patient compliance as well as the sum-total care given in previous years, the percentage of hypertensive people fell to about 40%, as did other diseases. The same year, turn out hit the roof. I traveled several miles to rent additional chairs and makeshift shelters but was still unable to adequately provide for all the patients. From 2007 to 2008, the incidence of the diseases had fallen to less than 10% in the original population group. However, with the expansion of the program and the addition of new communities, I found the same high incidence of chronic diseases that I had found in my community at the start of the program in 2004. It is my intention to continue to reduce the existence of these diseases in all these population groups, with your help.

I have made a significant health impact in my community and its environs through my self-sponsored yearly medical missions. If I could do this with my limited resources, imagine the expanded area I could cover with your donations by inviting many of my willing colleagues.

Throughout these years, I also visited the local primary schools to donate books. Most of them studied in classrooms with leaky roof and undone floor, and with your help, I can construct brand new blocks for them as well as provide school supplies and place them on scholarship.

Your tax exempt donation will sustain and expand the program. Thank you.

The videos and photos of the official dedication ceremony are available for viewing! Enjoy them and feel free to download the video right from the viewing page.